Found this in my draft folder – from December 2012

I have a complicated relationship with Syria. As a fiercely nationalistic Lebanese, I grew up hating its army of soldiers stationed on our soil with their big menacing tanks, and blaming much of my country’s woes on the overzealous brotherly ties that held us captive and subservient. During our weekly trip to my parents’ villages, up north and down south, it was routine that our family car would be stopped at one of their many checkpoints. A soldier in worn down fatigues would inquisitively stick his neck out of his wooden barrack checkered in black, green and red – the Syrian colors. And I would hold my breath to stop the flow of my resentful thoughts, thinking surely he would arrest us if he could guess them through my head. As soon as our car would drive out of their tentacular reach, I would stick my tongue out of the rear window in a victorious (yet cowardly safe, I admit) defiance.

In my entourage, we talked about Hafez with much contempt, but only in whispers. He was the monster who crushed Hama’s children. Yet our streets adorned his pictures – a reminder of the real person in charge. As we grew older and more politically aware, friends were regularly harassed and even jailed over their political outspokenness and demands for a full recovery of our sovereignty.

Those humiliations came to an end in 2005, triggered by the tragic bomb blast that killed our prime minister and reshaped my country’s history yet again. My classmates and I skipped classes to protest the violation of our soil, the impunity of crimes, the unfairness of a system that was holding us back. A month later, I sneaked out of my sleepy household before dawn, raced the deserted streets towards Beirut, parked my car in the vicinity of Martyrs’ square, and walked resolutely towards the announced protest meeting point. There was no Facebook back then, only text messages. Yet the square was far from empty. Some had been sleeping in makeshift camps right there for days now. But the area was cordoned off by a line of armed soldiers blocking the way. Oblivious to the Kalashnikovs dangling on their shoulders, we waited to become a critical mass as more people were arriving on site, and ran towards the line of soldiers, body to body, repeatedly, until we broke it and joined the inflating ranks of those inside the square. No soldier used his arm – they had no intention to. This was the day I reconciled with my army. I can still remember the feeling of exhilaration that gripped our guts when international leaders backed our calls for a solid timetable for the retreat of Syrian troops, and Bashar obliged! Oblivious to the larger forces at play, we felt that WE had done it!

That victory – maybe the first of the Arab Spring, was pathetically short-lived as the entrenched Lebanese political system swiftly corrupted even our purest dreams, but that’s a story for another time.

I only really discovered Syria the country in 2009. One of its highest-ranking officials invited the organization I was working for at the time for talks about a governance program. Inviting an international organization to Syria was gutsy. That the work was around public reform was further surprising. Those were the days of hope, with indications of a will to change and to engage the wider international community… The people who I met during that visit were so similar to my countrymen in their aspirations and discourse – we were indeed brothers. Encouraged and intrigued by my encounters, I went back to Syria that summer. Damascus, the vibrant, the cosmopolite… Aleppo, superb Aleppo, mixing 13th century defense heritage with the quirky stillness of the 60s… Aleppo sits outside of time. And Palmyra the enchantress, lost on a map, offering itself by surprise to anyone who bothers visiting. Cities lingering in the past, waiting to lurch onto the future. Developed way below their tremendous potential. Gripping. Fascinating. A people avid of life; a little subdued, but sparkly with aspirations.

If this wasn’t enough to reconcile me with Syria, March 2011 did. How not to cheer for the unquenched thirst for dignity and freedom of the children of Daraa? The fearlessness of the bloggers, the tirelessness of the community organizers, the pride of the activists? 19 months later, Syria’s children are still dying, only in increasing numbers. The innumerable gruesome youtubes and photos revolt and numb at once. I lost track of the dead. We all have. For even the living are dead – of rumbling stomachs from hunger, of desperation, of fear, of not knowing when the end is and what the day after would look like. It is impossible to identify with those pulling triggers, throwing grenades, and pointing tank. The cause was worthy, the fight necessary. But which cause? Which fight? 647 days later, it looks damn complicated. The destruction, the broken intercommunal ties, the infiltrated extremism… As a Lebanese watching this unfold like a distant nightmare, I ask myself a million questions in disbelief. How long would it take to reconstitute the social fabric of a society that cohabited without mingling for too long – just like us? How unsettling would be the consequences of a war where no side is a winner – except imported wackos of all trade, mercenaries of death – just like for us? What would it take to reconstruct the spirit of Aleppo, of Damascus? Forget about the stones and the cities – what the hell would it take for the families of 50 thousand people to grieve?

Lebanon now counts 1.5 million Syrian refugees. The death toll in Syria? Honestly I don’t know. 150,000? What is the meaning of a number this large?

The spirit of a People as old and as resilient as Syria’s is impossible to tame, though. Those who left are only circumstantially refugees – they’re survivors. Look at Zaatari camp where life has organized itself in streets and courts. Those who left are artists, spilling their aborted dreams on canvases, adorning the walls of galleries around the world. Those who left are entrepreneurs, building companies and products that the world is purchasing. Those who left may or may not come back, just like us. 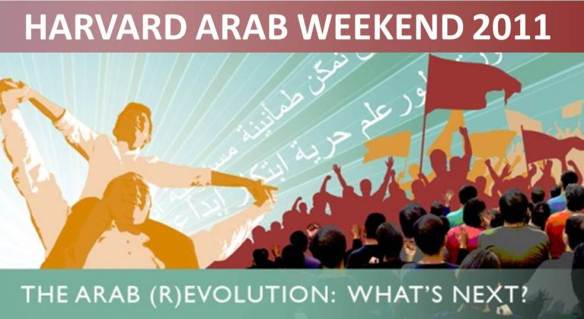 The Arab World’s overdue awakening is now irreversible and unstoppable. This was the feeling that dominated the 5th Harvard Arab Weekend (HAW), which took place this weekend across Harvard University. Under the theme Arab (R)evolution: What’s Next?, the weekend brought together more than 600 participants in what is the largest pan-Arab conference in North America. In place of the usual royals and government figures, this year’s conference showcased opposition figures, rebel leaders, and young activists – in whose hands lies the future of the region.

END_OF_DOCUMENT_TOKEN_TO_BE_REPLACED

Last week the founders of Arab Development Initiative (@ADInitiative), a student initiative out of McGill, came and pitched their project at the Harvard Kennedy School of Government.
The idea is simple: connect Arab students among themselves at the Envision Arabia Summit and facilitate the creation of a network of youth interested in challenging development issues in the Arab world.

Another initiative specific to Egypt is happening later this year in Cambridge: Egypt NEGMA (@EgyptNegma). (Negma means “star” in Egyptian Arabic). This conference will bring together social entrepreneurs who would compete for seed funding to implement their project in Egypt.

And then of course there is the Harvard Arab Weekend happening in November across Harvard University (more on that one later!)

Whatever comes out of these initiatives, one thing is undeniable: after years of apathy, the revolution(s) have made us miss home and long for being part of the change.

This work is licensed under a Creative Commons Attribution-NonCommercial 3.0 Unported License.